… a Naked wine that’s like silk wrapped around a slightly splintery wooden post. Does that sound sexy to you? Eh? 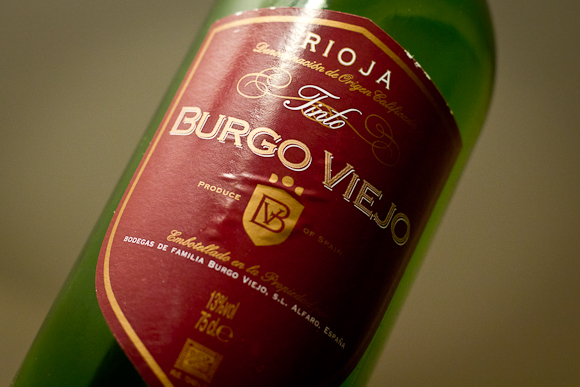 Apologies for that triple imperative — arguably a rather abrupt (if not outright boorish) way to begin a blog post. But if you happen to be in possession of a bottle of this Rioja from Naked Wines, let’s hope you’re also in possession of a decanter.

But before I elaborate, let’s talk a little about Naked Wines, shall we? Because it’s quite a funky idea for a business.

Essentially, the whole shebang is based on the principle that wine is cheaper the earlier one buys it. The logical extension? You buy up all of a wine before it’s even been made. You are giving the maker the security (so the thinking goes) to spend all their time and money making a good wine. Read more about the business model on their website.

Now, I’m not quite sure what I think about this. On the one hand, it’s an attractively original approach, and fosters engagement between grower and customer; on the other, capitalism is economically dominant for a reason, after all, and an organisation that has to fight for its sales arguably has a greater incentive to strive than one that’s implicitly insured against risk. Does a guaranteed income not potentially lessen the drive for excellence?

But that’s theory. I’m no economist; and, besides, we’re interested — aren’t we? — in practice. So let’s dive into this Rioja.

Okay, so here’s where my opening battlecry of ‘Decant!’ comes in. Because the first mouthful I took of this Naked Rioja was pretty disappointing. Sure, up the snout it has a sweet, enticing, raisiny waft. And sure, my tongue tingled like a fairy on acid — but the taste experience was oddly flat, despite the apparent intensity of the wine, leaving an impression of thinness, hollowness. My palate went largely untouched

And my palate LIKES TO BE TOUCHED, alright?

Enter decanter, stage left. Just as well I had a few thumbs to twiddle while I waited half an hour or so to let oxygen work its magic.

And it was worth twiddling. The wine became noticeably deeper, silkier — filled out, if you will. I’m glad my instincts told me I should try decanting, for I was otherwise poised to give this wine a bit of a belting.

The flavours and aromas (initially underdeveloped) expand to transformative effect. Peppered blackberries (just the way momma made ’em); liquorice. The combination of bitterness and fruit is strikingly like that of biting into a dark, dark chocalate-encased cherry liqueur.

Even after decanting, it’s somewhat austere: spiny, coniferous. In some respects it put me in mind of youthful pinot noir: it has that stalky vigour. That haughtiness. It plays hard to get.

Its bitter roughness, however, isn’t so pinot. I wonder if age would meld these two sides of the wine better? At the moment, it’s like silk wrapped around a slightly splintery wooden post.

(What do you mean, ‘That makes it sound kind of sexy’? Jesus.)

Just because it’s naked doesn’t mean you need to get all pervy about it.

Anyhow, this was the first of my six-bottle ‘trial’ case from Naked Wines. So we shall see how the remaining bottles stack up, shall we? They’re certainly in the game.