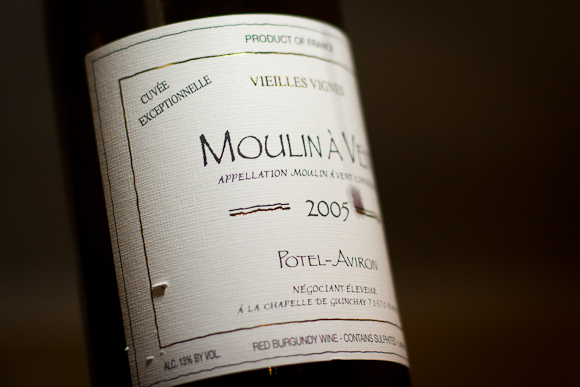 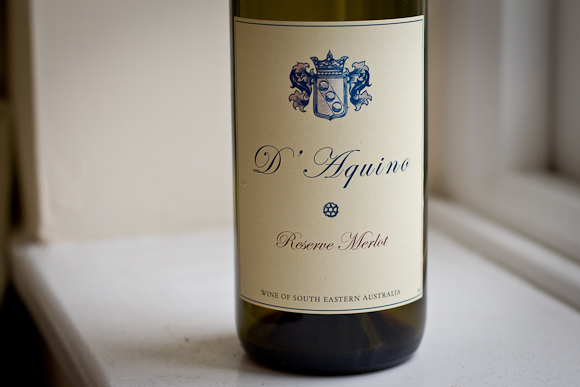 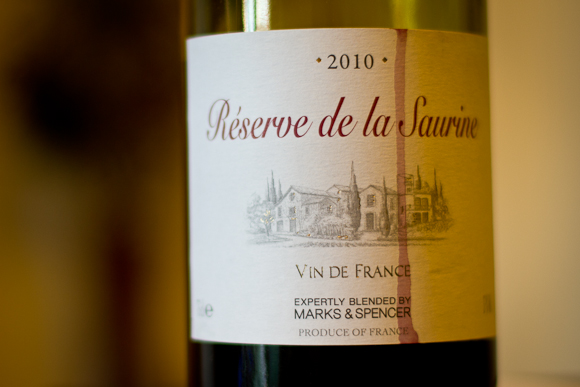 … is stuffed with more fruit that a small child at a pick-your-own fruit farm. But matures a hell of a lot more quickly 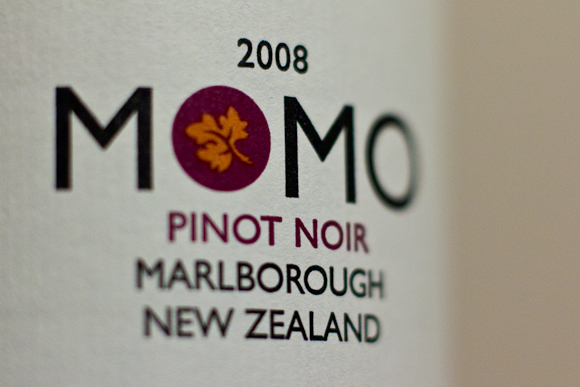 Another day, another pinot noir.

This time, it’s from New Zealand — Marlborough, specifically. And quite a different specimen from the last pinot noir to cross our threshold, the restrained, poised Palataia Pinot Noir from Germany. A good few quid more expensive, too, I might add.

Momo is a far more extrovert manifestation of the pinot noir grape. Like a small child on the way back from a Pick Your Own fruit farm, it’s stuffed with red fruits. Unlike the small child, though, Momo isn’t going to start bawling for your attention in about an hour with a stomach ache. Thank Christ.

Instead, give it an hour in the open air and it’ll get a fair bit more serious. Some bitter undertones develop, a savoury, smoky complexity. Which is most welcome.

Texturally, it’s delightful: that silky, silky pinot noir seduction. And whilst it may be accessible, thanks to all that fruit, it’s far from simplistic. As well as the smokiness, there’s pepper, cinnamon, roses, soil. And a smidge of caramel (but only a smidge).

A very enjoyable, stylish kind of wine. Nothing, I must say, to set the Parn palate ablaze — but very creditable, very accessible. Closer to an airport paperback than a penguin classic, admittedly. But a pretty good airport paperback.

What’s more, it’s a wine you’d have to work a lot less hard to love than a squealing toddler with an upset stomach and a stained mouth.

… is a spirited and jolly bid to make pink and green go together. And is sort of successful. 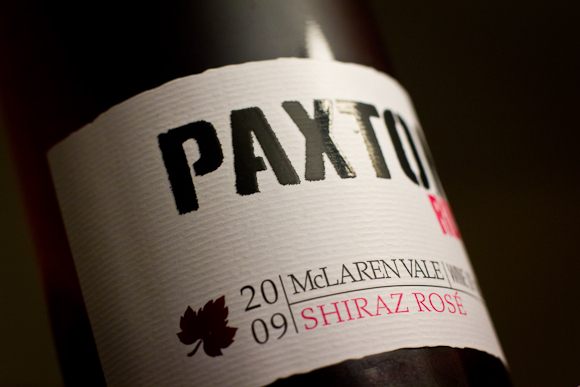 So. It’s very pink. It’s also green — on the face of it at least — judging by Paxton’s membership of something called 1% For the Planet, and the fact that the wine is made biodynamically.

Which sounds good, even if you’re not really sure what it means.

Meanwhile, fittingly given its colour, it leans more toward the red side of things than the white. You’d not want to chill this’n more than a tad, or you’ll kill off its plump, rosy jollitude.

Because, yeah, it’s pink; it’s jolly. Just like every stereotypical rosy-cheeked wench of tiresomely unimaginative fantasy fiction. Nose-wise, it’s all raspberry and strawberry — almost disconcertingly so, if you’re wary of Kia Ora wine syndrome, like me. And in your mouth, it’s very bright and full.

What surprises is the amount of body (which is what makes it more reddish than many rosés). There’s a good welter of matt tannic action. It’s potentially a mite confusing, even, given the sweetness of the initial mouthburst.

I’d very happily drink this wine without thinking too much about it. That sounds a bit of a back-handed compliment. I guess it is. But sometimes you don’t want to be challenged, right? Just ask President Mubarak.

I can imagine drinking it outside in the sun and having a fine old time of it.

But given its rosy-cheeked barwench simplicity, I’m not sure it’s wholly worth £11.99, though — unless you really, really like pink and green together.

…thrusts an unapologetic gallicism in your direction 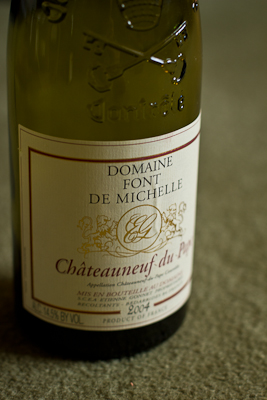 That’s a good thing, by the way.

I couldn’t tell you exactly what I mean by that, except that everything about its smell and taste thrusts an unapologetic Gallicism in your direction.

Its relatively rare — and very welcome — for a wine both to evoke an overflowing of fruit (here, ripe, fat cherries and crushed raspberries particularly, as well as dark, rich prune) and to maintain an almost austere, savoury complexity, bound in by a fruit-kernel-bitter structure.

This is a massive wine, a fireball blooming in the mouth. Suck and chew on it for several seconds and you’ll see what I mean. Its intensity and depth is port- or brandy-like. But despite its massiveness, it doesn’t overreach. It keeps its structure and integrity right through its development: no telling belch of alcohol or flab of fruity decay.

I’m not sure if you can still readily buy the 2004 Domaine Font de Michelle: I got it a while ago from the Wine Society, but it’s no longer available there. Other vintages, though, seem to be available at Waitrose and Lay & Wheeler. On the strength of this one, I’d recommend trying others.

… will fill your mouth with cherry; crushed, dark and bleeding 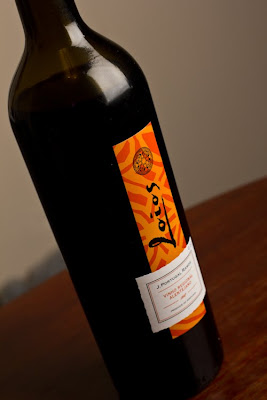 Tonight, I was grilling lamb. Lamb rubbed with cumin and paprika, alongside a broad bean salad with coriander, garlic and, yes, more cumin.

So that called for a red wine, and one that would stand up to the Moorish spices and charred intensity. I picked a Portugese red from the region of Alentejo, in which (according to Hugh Johnson) ‘A reliably dry climate makes rich, ripe reds’.

This is a good wine.

There’s a nice balance between savoury and sweet. On its own (I taste wines first without food, then with), its complexity is obvious. It’s not a glug-before-dinner wine. There’s a fair bit of tannin there, which makes it a chewable mouthful.

Very first impression (microseconds) is ever so slightly empty. But then there’s an explosion of flavour. Which almost makes that initial first-sip emptiness a virtue. From there on, no emptiness whatsoever.

Flavours are cherry (cherry stones particularly), but of the deep, ripe variety; not firm and ruby, but crushed, dark and bleeding. The savoury tannins entirely keep the fruit in check (which could otherwise be sickly) — balance is excellent.

Add food (and mine was very nice, thank you) and the benefits of those tannins become even clearer. Ever drunk a fruity wine with food and been confronted with a sudden almost cloying sweetness? That was probably thanks to the lack of tannins.

Loios won’t do that to you. No indeed. Without ever becoming exactly soft, the wine mellows and broadens. Juicy. If I do say so, this turned out to be a perfect match for my lamb, and stood up brilliantly to the paprika and cumin.

This is a very good wine. It’s serious, and you’d want to pay it attention, not gulp it mindlessly. Most people will want to drink it with food. To be sure of getting a French red of this quality, you’d have to spend a good whack more.

£7.25 is an excellent price, and I’d buy this again. Dinner party calibre, certainly.