A vain quest, you might say, to find the best gin for gin and tonic. I might agree. But it’s an enjoyable quest nevertheless. And not all gins are equal. Read on for a taste test of 10 common gins and a ranking of their G&T prowess…

You have cash in your pocket, and you have a thirst. Specifically, a thirst for that most noble of drinks, the gin and tonic. But you don’t just want any gin and tonic. No. You’re better than that. You, my friend, want the best. And that means you need to know what is the best gin for gin and tonic.

END_OF_DOCUMENT_TOKEN_TO_BE_REPLACED 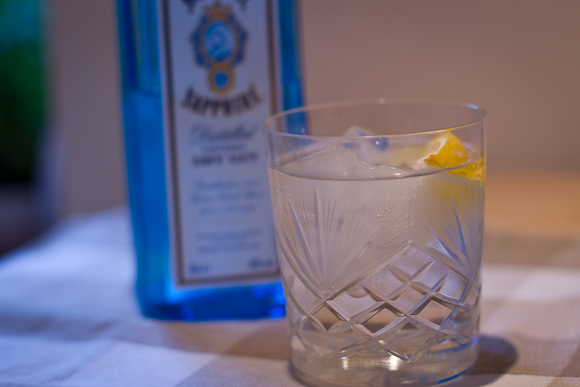 This post is an old one, from 2012. A much newer, bigger, better and ginnier version can be found here: The Best Gin for Gin and Tonic — 2019 Edition.

Below, for posterity/shits & giggles, the old version…

Skip straight to the results

How (without the aid of a convenient butler) does one compare seven of the most commonly available gins — side by side — without knowing which is which? Such was the conundrum that faced me and Amy (you remember Amy? She gave me a pear, a few episodes — I mean posts — ago. Get used to reading about Amy, won’t you?).

The difficulty is as follows: whoever mixes ’em will (obviously) know which gin is in each — but when you taste ’em, you both need not to know. Finally, after you’ve tasted ’em, you must both be able to find out which was which.

No. For Old Parn, ’tis a mere bagatelle:

And so it came to be that Amy took charge of methodology. And, with the aid of selotape and scraps of cardboard scavenged from the recycling, we constructed our experiment. Amy does this stuff with small children every day. She may not have expected to do it during her weekend as well. But if she felt a sense of weary deja vu, she concealed it gamely.

The upshot? Six anonymous tumblers of blessed gin and saintly tonic. Each with ice, a small wedge of lemon, a measure of gin and regular ol’ Schweppes tonic — to keep things simple. 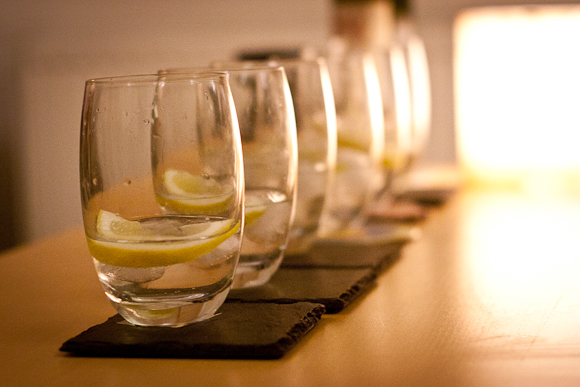 We tasted ’em. We compared ’em. WE EVEN WROTE NOTES. We know how to have a good time, Amy and me. Believe it.

Then we ranked them from one to six. And, finally, we tried to guess which was which.

(Unfortunately, thanks to an administrative failure, we were unable to include Bombay Sapphire in this test. But I blind-tasted it against a couple of others, subsequently, and added it to the rankings.)

Anyhow. You’re slavering like a goddamn pitbull, aren’t you?, to hear the outcome. Well, for god’s sake, wipe your chin and slaver no more. You disgust me. I mean, honestly.

Right. The grand unveiling. Which is the best gin for gin and tonic? Here’s what we thought.

Decidedly our least favourite gin and tonic was made with Beefeater gin: drab, bland and insubstantial. Of all the gins we tried, this’n had the least gob-presence, the least to say for itself. Compared to the others, it tasted generic, weak. The overall effect, in Amy’s word: ‘Lemonadey’ — because the tonic was allowed to dominate the drink, giving it an unpleasantly sugary taste. Nicht so gut. (Tasted blind, we both correctly guessed that this was Beefeater.) 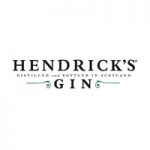 Next from bottom — and the enormous surprise of the proceedings: Hendrick’s. Hendricks! Now, I thought I liked Hendrick’s a lot, and I’d fully expected it to rank accordingly. So I was somewhat alarmed to find that, tasted blind, we found it slightly empty. Not unpleasant, but a tad meek. It has a nice breadiness to it, which I rather like — but not enough to set it apart. (I’d guessed this was Gordon’s, and Amy thought it was Plymouth. Alack!) 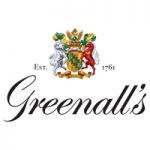 In 5th place, Greenall’s. Greenall’s is quite extraordinary: the stuff goddamn-well reeks of violets. It’s like drinking a flowerbed. But without the soil and grubs. It’s heady and hedonistic — and made the least G&Tish of all the G&Ts. Indeed, it was such an anomaly that we weren’t sure how to rank it: it’s undeniably enjoyable, in a decadent, fin de siecle kind of way. But not, really, y’know, what you’d turn to at a time of gin-thirsty crisis. (We both correctly guessed the identity of the Greenall’s gin and tonic.)

And then, in 4th? Plymouth. Which is nice and dry and punchy and altogether rather satisfactory. Maybe a tad middle-of-the-road, we thought — but when the road is signposted ‘Gin and Tonic’, who cares if you’re in the middle of it, eh? This was pretty much what we expect a gin and tonic to taste like. Bloody nice, in other words. (I identified Plymouth correctly, but Amy thought it was Gordons.)

So — the top three. These were all very sodding good indeed. Any of them would be a credit to your tumbler, and each one takes the noble drink in a different direction.

Third place — in the second surprise of the evening — went to Gordon’s. Which was really very good indeed. Crisp and supple and complex and savoury. And citrus, my friend, citrus! It’s got herby shenanigans going on, too, and it’s noticeably deeper and more serious-tasting than many of the rest. I was very surprised when I found out this was Gordon’s, because, honestly, it tasted more expensive. (We both thought this was Hendrick’s. And we were both wrong.)

In second place, just marginally above Gordon’s, was Bombay Sapphire. It’s a lovely savoury gin, with a riotous fanfare of corriander and brilliant balance.

And the best gin for gin and tonic?

The splendid Tanqueray. My scribbled note on this bad boy from the tasting: ‘BOSH.‘ Bosh indeed. Because this is a gin and tonic that doesn’t mess. It doesn’t flutter its lashes or mince around on the dancefloor. It grabs you and chucks you onto the bed. Fucking bracing stuff: big and dense and concerted like a punch. Masculine and dominant. Excellent.

So there you go. Of course, there are gins we left out. And to a great degree, the rankings above reflect our own notions of what a gin and tonic should be — a subject of almost philosophical weight. So if you like your G&Ts delicate and floral, you probably won’t agree with our elevation of Tanqueray.

And — hey — if you love gin and tonic as much as we do, I wholeheartedly recommend that you try your own blind tasting. You may be surprised.