The confluence of aesthetic principles and undergraduate pretension? Jameson’s Irish Whiskey, apparently. God knows why; I suppose you’ll have to read my Booze of the Week to find out. 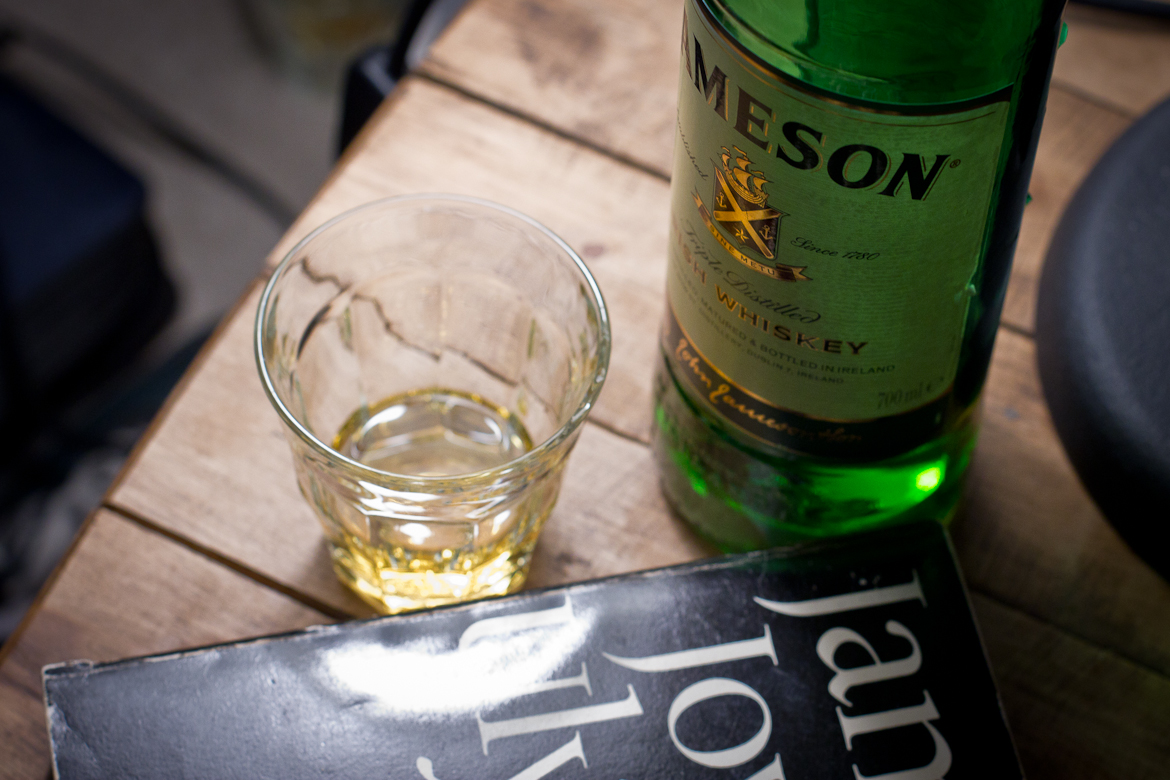 I don’t think we should underestimate the role nostalgia plays in our alcoholic predilections. We’re all just walking bags of meat and memories, after all.

My comfortable cohabitation with Jameson’s Irish Whiskey has its root in the confluence of — or compromise between — genuine aesthetic principles and appalling undergraduate pretension. (Writing the above, I am troubled at the possibility that the same contemptible triangulation is applicable to vast swathes of my life.

Bringing a tumbler of Jameson’s to my lips can still conjure the inside of somewhere like this:

Even these days, I pretty much always have a bottle of Jameson’s in the booze cupboard. Just the standard one — 40% ABV, generally about twenty quid for a bottle. Nothing fancy.

I was a latecomer (scandalously late) to the joys of beer. Instead as an undergraduate I drank G&Ts, wine and cocktails. For those young scamps among you who’ve only known an adult existence during which gin has been elevated to an extent that approaches deification, you ought to know that there was a time at which you’d order a gin and you would not be asked which one you wanted, because there was only one. In most pubs, gin meant Gordon’s. Occasionally, it meant Beefeater instead. If you were somewhere wanky, there might be Bombay Sapphire. Tonic was quite possibly on tap. If bottled, there was a fair chance it’d be sodding Britvic rather than the preferable Schweppes. Fever Tree was still a mere twinkle in a private equity fund manager’s eye.

Entering a pub, I’d routinely perform the Britvic check: approach the bar, try to get a good enough view of the fridges to ascertain the tonic brand, then choose my poison accordingly.

(To be fair, I still do this today. You can never be too careful.)

So it was that I acquired my taste for Jameson’s.

I told myself a story about Jameson’s, too. And booze is about stories, isn’t it? I loved James Joyce when I was at university (I mean, I guess I still do, in some ways, just from a much much greater distance. I’ll let you into a secret: it’s actually a hell of a lot more comfortable this way) — and I think Jameson’s actually shows up in Finnegans Wake… Yup, these guys did the research and I do remember correctly:

‘Rot a peck of pa’s malt had Jhem or Shen brewed by arclight and rory end to the regginbrow was to be seen ringsomee on the aquaface.’

Jameson’s was (and remains, I’d contend) a drink you could order in pretty much any pub in this forsaken country of ours. You’d be asked, no doubt, if you want it with ice (no you do not), and you’d get a glass (god knows what kind of glass, but it’s not so very important) with which you could retreat to your secluded corner, your whiskey clutched in one hand, a copy of Ulysses in the other (careful, careful, make sure you hold it so that people get a good view of the title.)

Jameson’s… it’s not a drink you really expect to write about, is it? I mean, it’s odd enough perhaps to earn you a raised eyebrow from some bartenders if ordered early in the evening, but it’s hardly an exotic or trailblazing choice. It’s not something I really think about. And as I sat here, half an hour ago, wondering what the hell I should write to you about, my dear, it didn’t remotely occur to me. I was all set to crack out another post about bloody vermouth, but—

My eye fell on that bottle of Jameson’s in the cupboard and I thought, no.

And I poured myself a familiar dram.

Listen, it’s just an unassumingly nice drink. It tastes like late afternoon sunshine towards the end of August… Warm, mellow, sweet. It doesn’t challenge you, it wants no aggro. Even the heat of the alcohol, when it arrives, is soft; the crescendo of flavour very much that of a string quartet rather than an operatic overture.

I think there’s a lovely balance between the honeyed sweetness and the gentle, spreading heat.

And it shits all over a Gin and Britvic Tonic with two rapidly dwindling icecubes just as comfortably now as it did in 2002.