Lone Wolf is the kind of gin of which the captain of secret police in a repressive, totalitarian regime would heartily approve. Question is, does Old Parn feel similarly…? 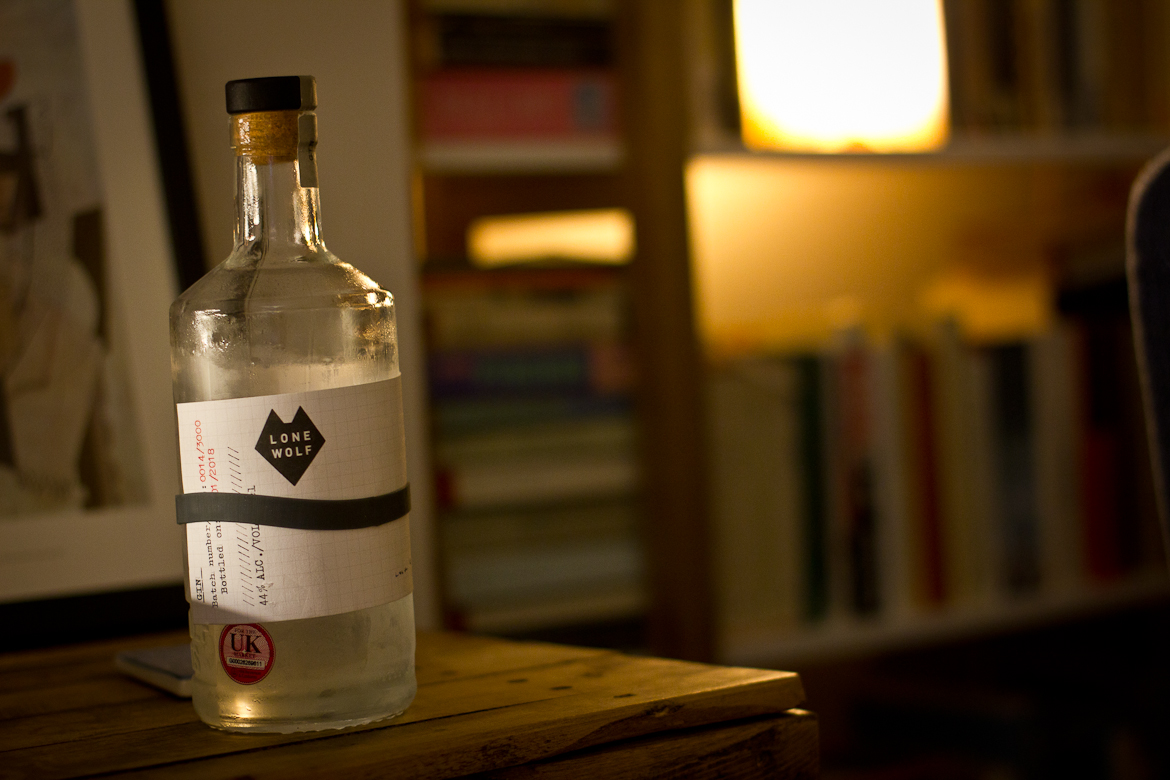 Come in! Come in! Fortunate favourite of Old Parn — or else not so fortunate.

Okay, this is a bloody good gin. Depending upon your feelings about those publicity-hungry scamps Brewdog, you’ll either be heartened or dismayed (or, perhaps, a complex and unsettling mixture of the two) to know that Lone Wolf Gin is affiliated to the aforementioned company. But we’re here to talk about the booze, not the bizniz, aren’t we? So let’s get on with it.

Lone Wolf falls squarely into the punchy quadrant of the Old Parn gin-o-gram. So punchy, in fact, that it punches a hole through the gin-o-gram and splits the (stone) table it was sitting on. This is a gin that’ll have you reeling.

My usual G&T for gin review purposes is 1 measure of gin to 2 of tonic. I mixed one Lone Wolf G&T with Fever Tree Light Tonic Water and one with Fever Tree Regular. I also made G&Ts with Tanqueray, which I used as a frame of reference against which to compare, and certainly not an excuse to have more gin and tonic.

Zounds! The Lone Wolf Gin and Tonic is a belter. With both types of tonic, it tastes far stronger than the Tanqueray (itself hardly mimsy). It’s full of juniper and spice and pine. Cold, dark, coniferous forests fragrant in a winter downpour. Really quite excellent, in my view. This is how I like a G&T: powerful, serious, uncompromising. Wolfish.

I think I prefer it with Fever Tree Regular Tonic, though it’s good with Light Tonic too. Regular smooths and softens it just a little, teasing out some warmth, some voluptuousness. With Fever Tree Light, things are just slightly more perfunctory.

It’s not exotic (the prominence of pine is the most strikingly atypical thing about it, but it still very much tastes like gin), and the hoofing deep/dark flavours are nicely cut with citrus, keeping it from being too gruff. I’d suggest serving it with lemon (or grapefruit if you have one kicking about) — or you could chuck in a sprig of rosemary if you want to amp up the woody stuff even further.

The Negroni game is harder to play with a bossy bastard like Lone Wolf. My first attempt was terrible: equal measures of Lone Wolf Gin, Campari and Cocchi Vermouth di Torino. The Cocchi is crowded out (except for its sweetness), resulting in a Negroni with a thudding bass, a bit of shrill treble, but not much filling out the mid-range — like listening to your neighbours’ amorous antics the other side of your bedroom wall. There may well be good stuff involved, in other words, but you’re not getting the benefit.

What you need to make a Lone Wolf Negroni work is a similarly assertive vermouth. You may recall that I have an open bottle of Asterley Brothers English Vermouth lingering lugubriously in my fridge and that works far better. I also — as is my wont — substituted Sacred Rosehip Cup for Campari. This made for a hugely superior drink: quite a distance from the typical Negroni, but balanced, complex, strong. Rather damn nice.

Bottom line, though: Lone Wolf is not ideal for a Negroni, primarily because it’s too damn full of flavour itself. With Campari, there’s a bit of a clash (two motormouths at a dinner party). Work around it as I did above, or (perhaps more sensibly) save it for drinks where gin is unquestionably the focus.

I guess the clue’s in the name. This is a Lone Wolf, after all, not a goddamn Pack Wolf.

Yes, finally, the martini test. I was impatient — and so are you, because you already know it’s going to be good. Therefore I went for a Duke’s Hotel-style martini (no pissing around with ice and stirring, just a freezer-cold glass, rinsed with a little vermouth, freezer-cold gin poured straight on, large lemon twist) and, Christ alive, it’s good.

The pine and juniper heavies mug you at the beginning, in that charming mockney way of theirs — don’t worry, they won’t break the skin — and afterwards, as you lie there in the gutter, blissfully concussed, you’re in for a long, toasty-warm, creamy-dreamy finish — I’m talking ten, twenty seconds (exhausting, eh?) — during which the taste becomes ever more sweet and perfumed. If you squint your tastebuds, there’s rose in there. Fucking rose. This is the kind of thing that got Edmund into deep shit in The Lion, The Witch & The Wardrobe, gobbling Turkish Delight while being whisked through the snowy forests by the queen of ice. If that’s not Lone Wolf Gin in the Witch’s magic hipflask, I don’t know what it is.

Oh, yeah, well done if you saw the Narnia metaphor coming. Your attentiveness makes this all worthwhile.

So sod Peter, Susan, Lucy and that fucking Faun. I’m in the sled with Ed. Ed, the Witch and the Wolf.

Lone Wolf Gin is £31.95 at The Whisky Exchange and also stocked in Tesco and Sainsbury’s if those are more your (5p) bag. It has an ABV of 44%. I advise that you ignore if you can the fact that it is described as ‘gin for punks’. Brewdog, eh?