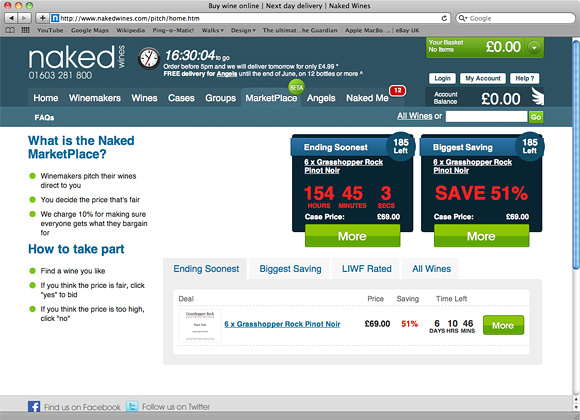 Okay, so what’s Naked Wines up to?

A Naked Marketplace, that’s what.

Now, there comes a time when dignity and good sense tells you, ‘Stop right there, Parn. Don’t you think that enough easy, easy puns have been made using the ‘naked’ part of Naked Wines? What I’m trying to say, for the love of the risen lord, Parn, is this: DON’T FUCKING BEAT THAT ROTTING HORSE CARCAS ANY FURTHER. Yes, I know it’s a verbal open goal. But sometimes you just have to walk away from an easy open goal.’

That’s what good sense tells you. (Good sense, I might add, would be a shit premier league footballer.)

So. Yeah. Naked puns are cheap as dirt. I know this. But, come on. It’s a NAKED MARKETPLACE. Can’t I please just make one little innuendo?

So I’ll be serious. Let’s see how much fun that is, eh? Soon, mark my words, you’ll be begging for more naked gags. Bitches.

(Here you see why Old Parn never got out of the starting gates in his early ambition to be a journalist. Because we’re SEVEN PARAGRAPHS IN and you still have no sodding clue what the story is. But we’re amongst friends, here, aren’t we? Besides, TRADITIONAL MEDIA IS DEAD, innit? Like that horse I mentioned, before.)

OKAY. So here’s the scoop. Naked Wines is launching a marketplace via which the customer can ‘bid’ for wines direct from the producer. Naked sits there (like Apple in the App Store — indeed, with nakedness and apples, this is all getting rather Edenic, don’t you think?) — simply providing (in theory) a forum within which these negotiations and purchases take place.

(Naked will take a 10% cut. Which is a good whack less than Apple, I might add.)

What does this actually mean? It means that producers can find a market without going through the usual channels of importers & retailers. Instead, they just go through Naked. Cutting out a bit of the middle-man (for argument’s sake, let’s say his torso and a bit of his pelvis). So — the idea is — savings for the customer and the producer.

Indeed, you could pursue my metaphor and imagine that the wine producer and consumer sit down together and good-naturedly get to know one another over a fine dinner made from the torso and pelvic meat of that unfortunate middle-man we mentioned earlier, with a side dish of beaten horse. All washed down, natch, with a glass of the red stuff.

(I imagine so, anyway. Though none of my wine books or resources suggest appropriate wine matches for either horse-pulp or human meat, so I can’t be sure.)

Now, there’s a bunch more info about this that I haven’t told you (no, no; instead, I’ve wasted your powers of concentration of images of pelvis-chewing and equine violence. Shame on me). Indeed, I have a very nice press release right here that Naked Wines’ very own Fran Krajewski disarmingly suggested I might like to take in order that I might ‘throw it into the bin later’.

So — if only to give the lie to poor Fran’s pessimism — let me rattle through a bit more bumph about this Naked Marketplace.

In a way, think of it like Amazon Marketplace. Anyone can list something on there; Amazon brokers the deal. Because marketplace items may be either very scarce (not available via any other retailer) or bargainously cheap, the customer gets a bit of that thrill of the hunt, I suppose. Snapping up a good deal or a rare delight. Tracking down a virtual wildebeest, as it were, and dragging it back to the cave. (Um.)

So (with each paragraph, my natural affinity for an MBA course at a top business school becomes ever clearer) — the wine producer states an asking price for the wine. The customer can then either agree to pay that price, or can make a lower bid. Say, offering £8 for a wine priced at £10.

A bunch of other customers are all doing the same thing. So what we end up with is a reflection of what people are willing to pay for this wine. The producer can see this — and can make the decision as to the ultimate selling price, knowing exactly how much demand exists at that price point.

So hypothetical producer might choose to stick at a higher price for fewer sales, or go with the lower bids for more sales. Obv, dude. And, assuming the lower price is chosen, the customer gets her wine for less moolah.

I’ll be fascinated to see how this mechanism works in practice. At tonight’s demo (Rowan Gormley presenting to a packed room of wine bloggers), I couldn’t see much of the actual user interface (which I suspect will be key in rendering the whole process simple-seeming and unintimidating). But given Naked’s fairly decent record of simplicity and plain-talkin’, I hope this side of things will be well-managed.

But enough slathering and waffling. Get your bad arse on over to the Naked Marketplace and see for yourself. It’s launching tomorrow. Which is (by the time this is posted) ALREADY TODAY.