… will take you down a crispy duck boulevard. But quietly. 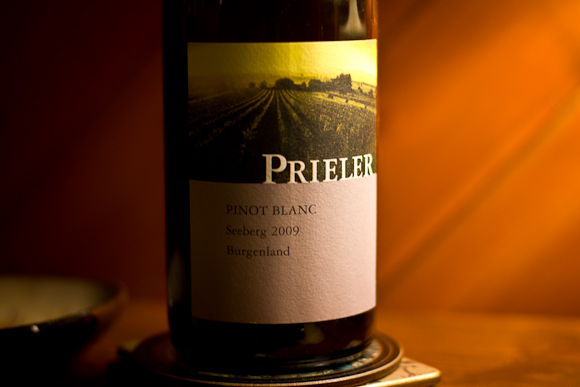 Let’s kick off with the good: this is a liltingly fresh pinot blanc, front-loaded with a walloping great bomb of soft fruit. And take it from me, dear reader: it you’re going to be walloped by a bomb, there’s no better bomb by which to be walloped than a soft fruit bomb.

Meanwhile, shove your schnoz into the glass and you’ll delve your way into a magical fantasy land of lemon sherbet fountains and boulevards lined with streetlamp-sized crispy-duck pancakes (yes, really: the water-blood of just-sliced cucumber combined with hoy sin sweetness and sizzled duck).

Back to the gob and, post-bomb, you’ll find there’s a certain unexpected bitterness. Not unpleasantly so.

But the rub. Ay, the rub. You knew there was one coming.

In other words, I should probably have held back on the crispy-duck boulevard stuff above, which makes it all sound quite psychedelic and in-your-face, I realise. But can you blame a man? It’s not every day you get an oriental delicacy wafting up out of your white wine at you.

Y’see, the problem is that you have to work relatively hard to get much out of this wine aside from its initial fruit bomb. Which, though nice, is scarcely £13-worth of bomb (sorry to disappoint you, wine terrorists).

So, to be honest, I expected the wine to be a good bit more interesting than it is. What post-bomb complexity it has, it conceals beneath a veil of chardonnayish anonymity. Which is a shame.

Tasting it, I felt bleary-tongued: as if my senses somehow weren’t quite awake enough to experience it properly. Because everything except la bombe is too distant, too muted.

It’s not a bad wine, but at this price it should be better. Dial it up, Prieler, dial it up. Except the bomb. That’s loud enough already.