… will allow you to live the dream of swigging 20% ABV sherry from a beer bottle. LIKE A MAN.

First things first. This is a bottle of dry oloroso sherry. Indeed, it’s a half bottle. And I’ve made my admiration of both half bottles and good sherry abundantly clear in the past. 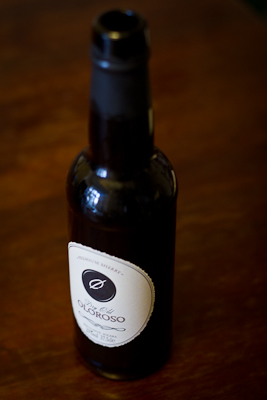 My admiration for this half bottle, though, goes a step or two further. Because this is sherry in a beer bottle. FINALLY MY DREAM HAS COME TRUE: I can slyly swig oloroso sherry from the bottle whilst hanging out with the lads — yet not compromise my appearance of nonchalant masculinity.

(An area in which compromise is a fearful prospect indeed.)

So, the only question should be: is this the sherry you’d want to swig? Or should you carry on rinsing out old beer bottles and laboriously refilling them from that tank in your cellar?

So, uncork the blighter (yeah, they haven’t introduced a bottle-cap yet) and you’ll be greeted by a delicious waft: full, mellow, barrelly. It smells lovely. Once it makes its way into your trap — well, it’s still pretty nice. Nutty, yes, and spicy too. Like spicy nuts. Or nutty spices, I suppose. At first, it’s delightfully smooth. But let it linger in there and it’ll give you a belt around the tastebuds, enough to bring tears to your eyes.

(Or maybe I just cry easily. Nonchalant masculinity, like I said.)

So, yeah, it’s not the most refined of sherries. That’s a shame, because I’d dearly like that woody sweetness it has to develop more in my mouth — but I daren’t let it, for fear that my ‘mates’ will discover me weeping over what appears to be a bottle of beer.

Nevertheless, it’s a handy thing, to have sherry in a 37.5cl bottle. And a glassful of this made a goddamn mean sauce for my seared tuna steak with caramelised onions. Which surely has to count for something.

So: a creditable performance, but a tad eye-watering for Old Parn. Sly sherry-swiggers may note with excitement, however, that M&S has a whole range of sherries, all bottled thus. And I’m clearly going to work my way through them all.