…will alternately patronise and assail your tastebuds 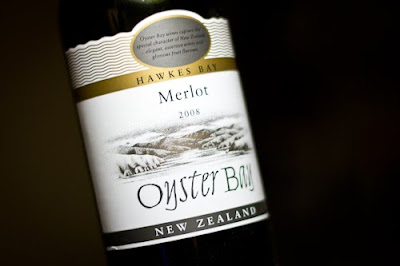 But let’s start at the beginning.

The only reason I have this bottle is that I was given it. By an organisation, I hasten to add, not an individual. A ‘thank you for your business’ kind of thing.

But, yes. I don’t buy wines that look like Oyster Bay Merlot. Nail me into a broomcupboard and call me Satan if you wish (and what else would you do with Satan but nail him in a broomcupboard, I ask you?) — but that’s the unvarnished truth. It’s prejudiced, I realise, but my experience of mass-market wines that look like this and are called things like ‘Oyster Bay’ fills me with a dark, viscous dread.

Hell, I was never going to recommend it, you understand. But I was ready to concede that simply not being revolted was a kind of triumph.

So. The first thing that hits us? Ribena. Or Kia Ora. Or (Christ save us) Snapple. The kind of thing they’d market as ‘Very Berry’ flavour.

To be fair, this initial bouquet is hands down the worst feature of this wine (aside from its price: did I mention its price?). Because once (if) you get through it, you’ll actually be surprised at the amount of bitterness. There’s a touch of vanilla, but most of the finish is dominated by the woody depths of the tannin.

A schizophrenic wine, then. All kiddy sweetness to begin with, then cagey gruffness to finish. And there’s no transition to speak of: the flavours shift abruptly, without ceremony. Quite bizarre.

So, as I may already have implied, a price tag of £9.99 on a wine like this is an absolute joke. At £6, I’d have expected the Kia Ora — but been grudgingly surprised at the unexpected tannic depth. It would certainly not have succeeded in making me commend the wine — but it would have succeeded in being better than most of its ilk.

Paying ten quid for this is like paying ten quid to have an unattractive gigolo spend an evening patronising you with syrupy platitudes and discussing Nietzsche. In alternate sentences.

Whatever turns you on, I guess.

Me, I chucked the rest of that gigolo straight into a casserole. Yum.