… is neither despicable nor mucky. Or, if it is a tiny bit mucky, only in a reassuringly rustic kind of way. 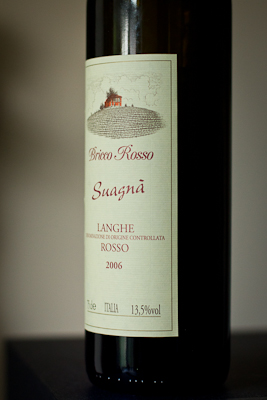 I mean, look at the despicable muck you could be buying for £3.50 more than this. Look at it. Weep.

This is neither despicable nor mucky. Well, maybe it’s a tiny bit mucky — but only in a reassuringly rustic kind of way. You know. Aniseed, a bit of leather and bramble?

Nothing wildly unexpected, I suppose. But that’s not the point, is it? The point is that it’s £6.50. 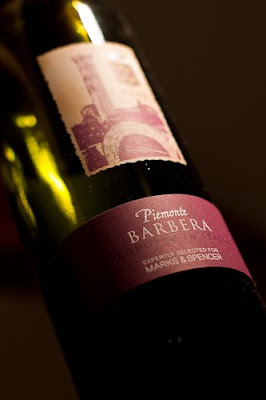 I fear this photo may actually make the wine look more appealing than is my intention.

A really, really horrid wine that was nevertheless, I observe with icy authorial detachment, nominated (in its 2007 incarnation) as ‘wine of the week’ by none other than the Belfast Telegraph.

I wouldn’t have bought this (Belfast Telegraph recommendation notwithstanding), but for the fact that I was snaffling up one of those Marks & Spencer ‘Dine in for £10’ offers, ages ago, and literally had to get it. Yes, had to. There really was no alternative.

So, yes, insofar as it qualified me for the meal deal, picking up this wine actually saved me money.

That’s about all I can say in its favour, however. Because I’m afraid it actually tastes like sick.

Just as well, then, that I opened it with the express intention of casseroling the blighter to within an inch of its grim and impoverished life. But I thought I’d pour myself a thimbleful and chalk up another review — just for y’all.

So, in what is my least nuanced review yet, I have little to add. I entitle this section ‘Verdict’ out of habit — but, once you know it tastes of bile, are you really in need of further summation? In case you’re hanging on for a redeeming feature, I’ll end your misery: there isn’t one. It has virtually no aroma. It is thin, watery, sour, bitter. I’ve only had two mouthfuls and I already feel a stomach ache lurking in the wings.

No stars for you today, M&S.