… will kick you like a university student’s cheap homemade cocktails 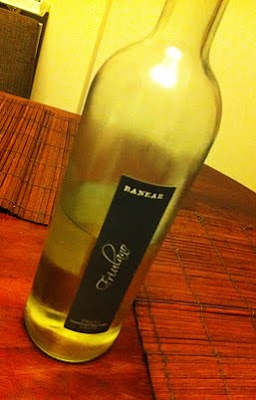 (Sorry, not the best photo; only iPhone camera to hand)

There are a shocking number of extremely poor Italian wines being sold in the UK. So I suppose I oughtn’t to be surprised that Banear Friulano is emphatically mediocre.

At least it’s not terrible. And this is a price point (£5.50) around which congregate a great number of offensively horrible wines. But that’s not really an excuse. And I’m afraid that, taking all the above into account, Banear Friulano still has very little to recommend it.

There’s a slight soapiness of the kind that often lingers also around Soave. And it’s one of those whites that manages simultaneously to be empty and over-concentrated. Leave a mouthful of this too long without swallowing and it’ll kick you like a combination of vodka and nasty cheap grapefruit juice. Like a fresher’s homemade cocktail.

It’s a shame, because before that vodka-grapefruit hits, there’s the tiniest beginning of a creaminess that, had it been permitted to bloom, could’ve made all the difference.

I’m being somewhat negative, although this isn’t — as I’ve said — terrible. It ticks various ‘adequate’ boxes, but I can’t find much to compliment, really. I suppose it’s ‘fresh’ and ‘zingy’, yeah — and a few more of those meaningless Wetherspoons-menu adjectives. And it’d be a fair enough appetiser, if only because, after a glass of it, you’ll be gasping for something else to cast onto the arid plain that your tongue has become.

M&S has a pretty good Friuli for a similar kind of price (I’ll find out its details next time I’m there and update this post accordingly). Drink that instead, and be reminded that neither Italian whites nor this region specifically are necessarily disappointing, even at a reasonable price.

Update: Yeah, that M&S wine I referred to is M&S Friuli Grave Sauvignon Blanc — seems to be a mere £6 at the moment, though I think it’s a bit more at full price. Buy it instead of Banear.