In which our intrepid hero subjects himself to the horror (the horror!) of three revolting sold-by-the-plastic-cup specimens from Marks & Spencer: Le Froglet Rose, Chardonnay and Shiraz. A truly gruelling experience. 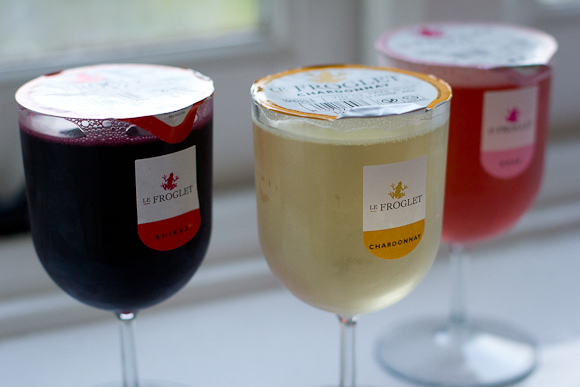 So, today we’re looking at wines sold by the glass (plastic): three (only moderately depressing-looking) specimens from Marks & Spencer going under the brand name Le Froglet.

Now, you know me for an honest commentator, I hope. So I must confess upfront that my expectations were very, very low. That said, I don’t want to be snobbish about this. There’s nothing remotely wrong with the idea of buying wine this way.

The question is — never mind the idea — what’s the reality like?

In answer, dear reader, I give you —

So. You’ve got over the novelty of opening a wine as though it were a yoghurt. What now? Stick your big old snout in there, that’s what.

Except that, being full to the thick plastic brim, there’s no room for your big old snout.

So pour it into a proper glass, why don’t you, and try again?

Your labours will be rewarded with a truly awful gutwipe of a smell. Like the breath of a depressed office worker who ate a stale bacon & egg sandwich for his lunch.

It is truly, offensively grim.

At this point, you’re understandably wary. But you chuck it down the hatch in any case, reasoning ‘Since when has my sense of smell ever been a reliable indication of putrescence?’

…and — first gob-impression? IT ACTUALLY TASTES OF NOTHING.

Unfortunately, you will be looking back on that first impression of nothingness as a kind of golden age of Le Froglet Chardonnay. It was at its peak then. ‘The tragedy of Le Froglet,’ you will muse, ‘is that it never recaptured that tantalising early promise of nondescript mediocrity.’

Because, after a second or so of wondering whether you accidentally just bought a plastic glassful of foul-smelling water — the stale sandwich you smelt earlier hits you smack in the gob. And fucking horrendous it is, too. Cardboardy flaps of egg-marinated bacon in that suddenly-not-so-tasty-tasty malted bread.

Now (you might note) the smell’s mellowed a bit. Now it’s like the remnants of a KFC bucket left out overnight in the corridor of a student hall of residence.

If you can manage to get this wine into your mouth without inhaling, it’s just about bearable while you hold it there. But sometime — sometime, my friend — you’re going to have to swallow. Then there’s the aftertaste. The preserved egg sarnie.

I am not exaggerating when I say that this is truly horrific stuff. There will be a patch of dead grass in my garden tomorrow morning where I chucked the rest of this devilpiss.

Imagine a nightmare scenario in which you are given a plastic teaspoon and ordered to eat an entire washing-up basin full of Tesco Value strawberry jam.

The smell of Le Froglet’s Rose is strikingly, strikingly similar to the smell of the strawberry-scented vomit that you will copiously spew in the aftermath of the above scenario.

Sickly sweet, but with a rancid acidic tang.

At least with the white (incredulous, I find myself harking back) there was some lingering presence of the chardonnay grape, even if in brutally abused form. Here, there is nothing but sickly, rotten, jammy fruit.

Once it’s actually in your mouth? Well, it’s not actually as full-on sweet as I’d expected. But horrible nevertheless. A bit bitter (not in an appetising way, but in the same way as accidentally sucking your finger after touching some chemicals), with overtones of loo cleaner. Not nice loo cleaner, either. The kind of stuff they use in prisons.

When the sweetness comes (which it does, like a warm, candyfloss blanket, once you’ve swallowed) it is almost a blessing.

I’m not entirely sure whether this is worse or better than the white. It’s less in-your-face-evil, but more slyly insidious. The white was like Krang in Teenage Mutant Hero Turtles; the rose is more like Nick Griffin.

I’ll leave you to judge which you’d rather spend an evening with.

… Which is dark. Dark as the soul of Le Froglet.

Snout-wise, it’s the least offensive of the three by some margin. That’s not to say it smells promising. No indeed not. But it’s not actively repellent. There’s sweet red fruit (worryingly sweet) and, yeah, vanilla. And cheap wood. It’s like walking into a discount furniture warehouse.

And in the gob, it’s also by far the least horrible. There’s still that ol’ bacon & egg sandwich whiff to the whole affair (which is clearly something to do with either the glue they use to stick on the lid or else some kind of preservative), but at least there’s a modicum of normality to the thing. I mean, it tastes like cheap plonk, sure. But at least it tastes like recognisable cheap plonk, not some outlandish liquid beamed to Earth by aliens as part of a sick reality TV escapade to amuse the folks back home at Alpha Centuri.

It’s very very sweet, yet also laced with a last-minute tannic mouth-shrinker. In no way does this qualify as a recommendation, but it has the dubious honour of being crowned ‘winner’ of this evening’s taste-off. A contest, I might add, that set me back a total of £7.95 (£2.65 each) — a sum I parted with heavily against my better judgement, and largely in order to provide entertainment to you. Yes, you.

So the least you can do is leave me a comment or something.

Now. Christ alive. Get me some malt whisky.