Here we are again for another instalment of COMMUTER BELTERS, my quest to find the booze best matched to the knees-rammed-against-plastic pleasures of southwestern railways. 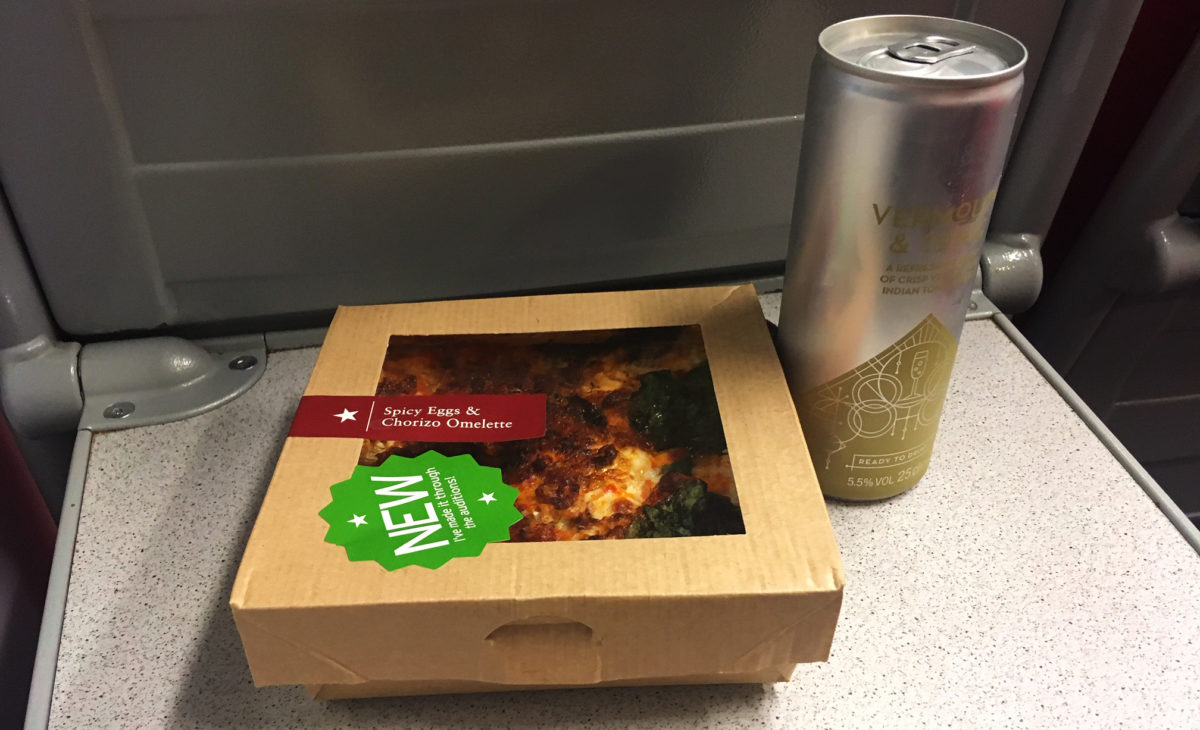 This time, emboldened mayhap by our liaison with M&S gin-in-a-tin, let’s push the boat out a little further into the treacherous seas of M&S’s canned booze range — to their Vermouth & Tonic.

Now, to be a true commuter belter, a drink must have an affinity for the typical cuisine and ambience of the South Western Railways experience. Much as one might judge a restaurant’s wine list by its wines’ ability to punch at the level of the main dishes, one judges a would-be Belter by its resilience against whatever degradations a typical journey from Waterloo might throw its way.

Today’s degradation of choice? One carton of Pret’s Spicy Egg & Chorizo Omelette. What better foldable tray-mate for my tastefully duotone can of V&T?

In one sense, the omelette is an excellent match: the experience of consuming both it and the drink is purgatorial. One might argue that they thereby cleverly echo — satirise, even — the experience of travelling frequently by South Western Railways. But satire is no excuse for this miserable stuff.

I’ll tell you a little about the food first, shall I, since we’re both here and have relatively little else to do? Well, the egg has the texture of that expanding foam filler stuff they use to repair car bodywork. It is hideously, malignantly overcooked. Most of it is stuck to the bottom and sides of the cardboard container, and I’m certainly not tempted to scrape away at it to get my money’s worth. Pret’s hot snacks, while always touch-and-go, aren’t normally as bad as this. Small pellets of chorizo and enormous moist slugs of red pepper provide relief of a kind from egg-chewing, in the same way that being punched in the face provides relief of a kind from a bout of norovirus. A woeful effort.

As is the drink. You’re warned as much as soon as you pfft the thing open and take a sniff. Friend, it smells like making a terrible mistake.

It’s a mixture of bitter lemon and that horrible fizzy-sweet reek you get from godawful energy drinks. And that’s exactly how it tastes. Ye gods, it’s sweet. Horribly, horribly sweet. The best thing about it is the initial lemon taste (not because that’s what you wanted, but because it’s at least in the proximity of an honest flavour), but almost immediately the bombardment of sugar hits, hollowing out all other flavours but the quinine from the tonic (like the G&T-in-a-can, this does at least feature quinine-heavy tonic).

The most criminal thing about it all is that despite this pitiless assault upon my senses, I can barely taste any goddamn alcohol. I mean, there’s a vague whiff of medicinal grapiness lingering in the background, like the smell of the crap someone took in the stall five minutes ago, but nothing more. The can says it’s 5.5% ABV but the impression is less boozy than most alcohol-free beers. It tastes like the heartless trick you’d play on a gullible child in order to put them off drink for life.

In summary, our Commuter Belter is not to be found here. All change, please.