… puts on other beverages’ clothing and hangs around in bars 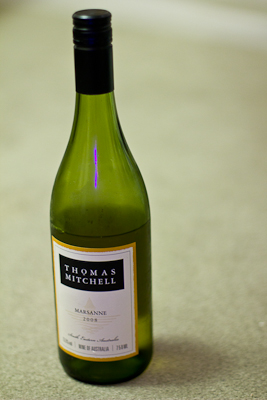 Well, for most of today I have been half-deaf. Yeah, that’s why they call me Old Parn. The mundane and somewhat distasteful reason for my deafness is a blocked right ear.

Anyhow, mindful of those stories that tell of people deprived of one sense enjoying increased acuteness in all others, I wandered (ensconced within my curious, insulated realm of semi-silence) into the Oddbins that nestles mere metres from my doorstep.

First thing that hit me upon cracking the blighter open? The smell of beer. Really. I’m not messing around: this actually smelt, at first waft, bizarrely lager-like. You’d think that’d be pretty offputting, non? But I didn’t find it so.

This is a rich, full, golden wine. A wine that has a great deal of heft. It’s butch. But perfumed, all the same. And there’s nothing wrong with being butch and perfumed, let Old Parn assure you right away.

And what perfume it is. So once the beer has subsided, welcome to the land of fruit juice. There’s loads of pineapple (fresh and slightly acid, not cloying and overripe) — in fact, there’s a distinctly cocktailish character to the thing. But not in the same way as that mediocre Friuli from last week. A hint of herbaceousness balances the fruit … and there is a definite fruit pastille presence. The green one.

It’s staggeringly huge in the mouth (yeah, yeah, as the actress said … whatever …) — not remotely subtle or restrained, it throws itself at your tastebuds and wraps them in a matronly embrace. Impressive, if you like that kind of thing. Indeed, its dessert-wine-esque hugeness leads to its most notable downfall: it’s too full-on. I’m more fussy than many about this — but I don’t like my wines to taste alcoholly. By which I mean, to have that somewhat raw, unrefined alcohol blast when left too long in the mouth. It makes them taste cheap.

And this wine otherwise tastes more expensive than it is.

For the price, and if you like whackingly domineering white wines full of alcohol and fruit (but still dry), this is a pretty good choice. Don’t pair it with delicately flavoured food, though; I’d probably stick to drinking it on its own, or alongside strongly flavoured/spiced dishes. Don’t worry too much about obscuring its subtleties.

To be honest, it’s not the kind of thing I often fancy. But who’s fighting for the fancies of a half-deaf old codger anyway? Certainly not big, butch, perfumed South East Australian whites.