…doesn’t pretend to be TS Eliot 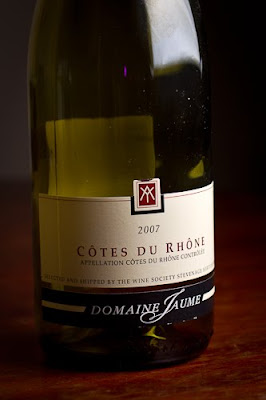 Aromatically, Domaine Jaume’s Côtes-du-Rhône isn’t especially forthcoming. There’s a bit of polish, a bit of woodiness. But I’ll admit that, on the evidence of first whiff, my expectations weren’t all that high.

But what a nice gobful it turns out to be. Big, full, confident. Swish it round and round your mouth for several seconds like a godawful prat if you like: it won’t turn to paint-stripper on your palate (unlike many big, roughish reds at this kind of price); it’ll certainly set the front of your mouth tingling like a recovering dead limb. But that’s invigorating, isn’t it?

Yeah, so it’s not a dignified, subtle wine; it’s a hoofer. But a very nice, balanced and (above all) reasonably priced hoofer. I drank it with homemade cottage pie, which was about right, I’d say.

There’s a bit of tannin there, but not lots. Understated but firm. Like a good teacher, who barely has to raise his voice in order to maintain classroom discipline. Or some such tortured metaphor. It keeps the wine focused and structured, prevents slackness at the fringes.

What else? Sweet cherries, varnished wood, liquorice, a not unpleasant hint of vegetation. Accents of black pepper and perhaps even cinnamon. And a very satisfying nuttiness to finish.

This isn’t the most complex or subtle wine. But you don’t always want complexity and subtlety, do you? Otherwise you’d be reading bloody TS Eliot instead of this old bollocks, right?

Yeah. Sometimes you want a good, honest gobfiller. That’s this.

And if someone gave me a glass of Domaine Jaume, I’d almost certainly guess it was three or four quid more expensive than it is. Which has got to count for something, right? Especially for a ‘well known’ French region like Côtes-du-Rhône, which is often horribly overpriced and mediocre, relying on name alone.

So, a fine value hoofer, then. Stock up.