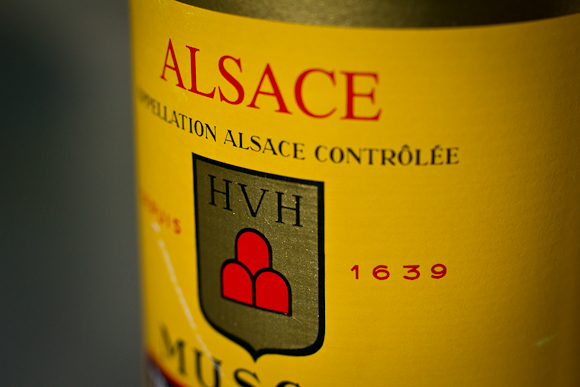 If I say this wine smells very Alsatian, I trust you won’t think I’m talking about dogs.

No. If there’s a dog that smells like this, that critter can breathe in my face any time. It’s floral, perfumed, with soft, ripe tropical fruit overtones.

If you drink wine from Alsace (and, Christ knows, you should) you’ll most likely be guzzling Gewurtztraminer — a grape variety for which the region is renowned. Yeah, and so it should be.

This, though, is a wine made from another grape: Muscat.

From a whiff at it, though, you’d be pardoned for taking it for its more celebrated sibling. Get it in your gob and the similarity to Alsace Gewurtztraminer remains, with that trademark aromatic richness, that stillness — but this has a greater degree of crispness. You’re greeted by a definite citrus bite, and left with a lingering marmalade bitterness. The effect is of a dryer, less indulgently swooning wine than your average Gewurtztraminer.

Though (let’s be clear) this Muscat still swoons a fair old bit.

This is a clear, clean, light wine. It’s rather pure. Transparent, you might say. It’s less grapey than I’d expected (Muscat being pretty much the only variety known for producing wines that actually taste of the fruit they’re made of).

Very creditable and pleasant, but I can’t help but feel that it’s a little insecure in its own identity, y’know. Like it’s trying to out-gewurtz a gewurtztraminer (a task at which it can only fail), rather than playing to its own strengths.

In other words, an Alsatian that — despite its delightful breath — could do with being taken to see a (canine) psychologist.